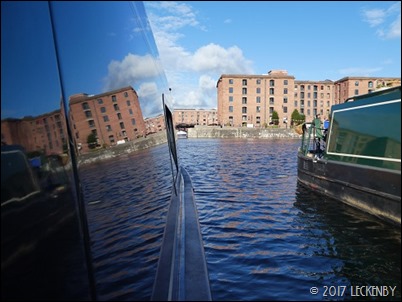 Mann Island Lock opens at 8am which is a few twists and turns from Salthouse Dock. Over the last week boats have left the moorings anywhere between 7:30 and 7:50am. So we set ourselves a push back time of 7:45am, which we knew would mean that we’d be early for the lock, but depending on how many boats were trying to pull out at the same time it gave us some leeway. After a quick breakfast and a failed attempt to get our Saturday paper we made ready to leave. We were beaten to pole position by NB Jacaranda and were closely followed out from the moorings by NB Lady Baltimore, we were the remaining three boats who had come into the docks last Saturday and were going to be the only three boats leaving today. 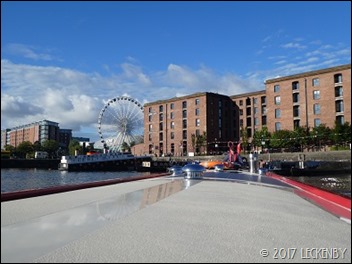 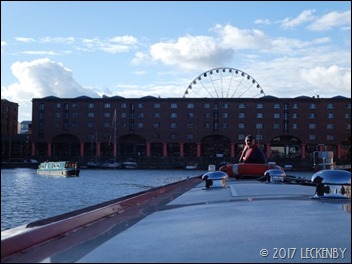 The bright blue sky and sunlight was gorgeous as we pulled away. The wind this morning was kind to us and Mick managed to wind Oleanna with no problems whilst the Titanic continued sinking at the far end of the dock, it’s been like that all week! 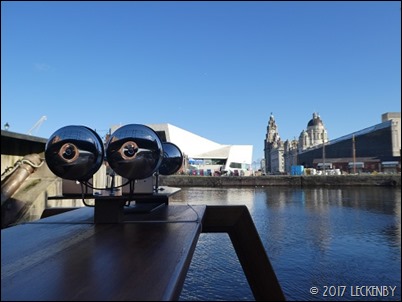 With only three of us going out through the link today it meant that as we were in the middle we’d be sharing with NB Jacaranda and NB Lady Baltimore would be on their own. Well that’s how it started out. 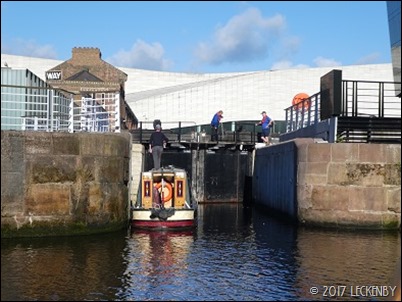 As we pulled up towards Mann Island Lock, NB Jacaranda had pulled into the opening before the flood gates, the lock keepers had just arrived and were unlocking everything. We pulled up and entered the lock together. The Lockies checking that we’d had a good time, I wonder if anyone ever says that they didn’t. They told us to carry on and if we got to the next lock before them then we could take ourselves up. 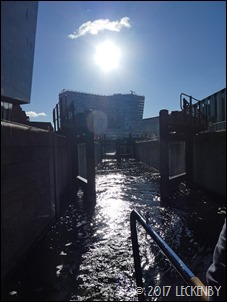 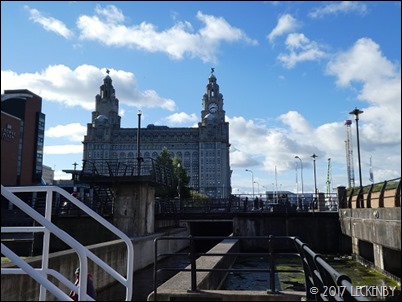 Tunnel lights on we followed NB Jacaranda out and through the three sections of tunnel. As we got close to the end of the last section we slowed down. Ahead Mr Jacaranda seemed to skew his boat, then he nudged with some force the bottom gates of the lock. He looked over his shoulder at us. At this point we thought he was a single hander, they quite often gently nudge bottom gates open, but this had happened with a bit of force. I stepped off the bow when we got to the landing and opened the other gate. It turned out that NB Jacaranda’s throttle cable had got stuck, he hadn’t been able to put it in reverse or even neutral, he’d had to turn the engine off and then had no option but to hit the lock gates. 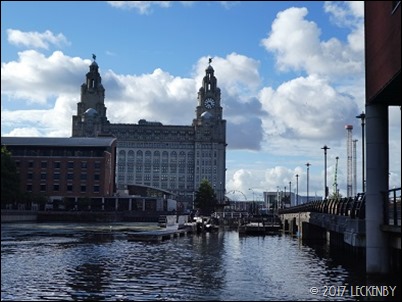 Mrs Jacaranda came out from below as the gates were closed and I opened up the paddle on my side. Mick stood chatting with them for a while and then a penny dropped in everyone’s heads. We’d met them before, at Crick this year when we were moving boats. In fact we had been given their mooring and when they returned earlier than expected they were a tad pissed off that someone was on their mooring. Well here we were three months later sharing locks with them. They pulled their boat out as the Lockies arrived. We offered to breast up or tow them, but the consensus was that we should go ahead, if it was something simple that was wrong they would join us, if not then they wouldn’t. 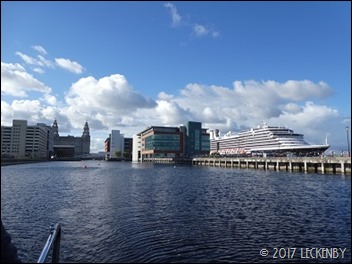 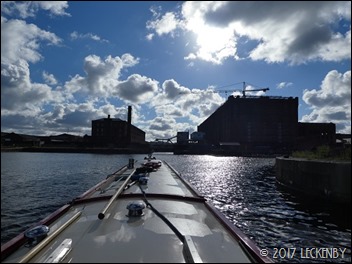 We pootled on along Sids Ditch. A huge cruise ship was in, it was as big as the buildings along side. Turning into Stanley Dock, the mural was still over looking us. Not sure if it will just stay or is the building it is on due for demolition? We pulled up at the bottom of the locks on the pontoon. The bottom gate paddles of the flight were padlocked shut and even the key of power didn’t work, so we had to be patient. After a while we could make out a figure in blue with a red collar working their way down the lock gates. NB Lady Baltimore joined us and we waited together for the lock to be unlocked and emptied. 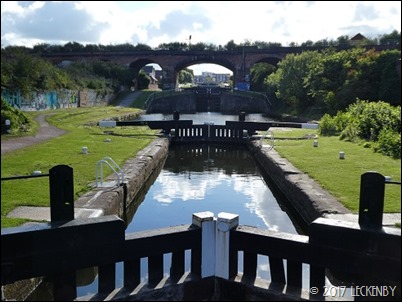 The lockie knew about the other boat. It wasmoving but the throttle worked on and off. So as far as he knew they were returning to Salthouse Dock to get sorted and would most probably be tagged onto the boats coming out tomorrow. So three became two. 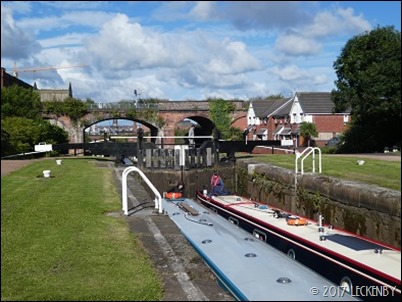 Mike, the lockie and myself worked the two boats up the flight and by the time we turned out of the arm it was still before 10am. We both pulled in at the services at Litherland and disposed of rubbish, yellow water, checked the weed hatch and popped to the very handy Tescos for a paper and a mid morning snack. Once we were done we pushed off with plenty of time to arrive at the first swing bridge. 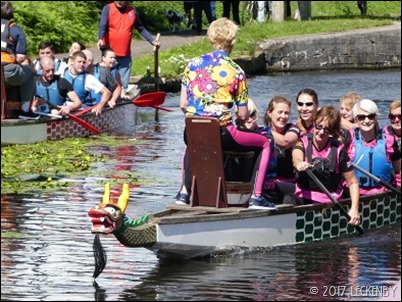 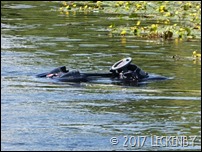 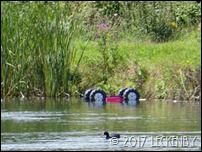 Our progress was halted for a while by a Dragon race. Marshalls asked us to pull over and wait for the on coming boats, but we opted to reverse instead so as not to get tangled in the lilies. Further along were more obstructions, two cars were floating in the cut. Both were quite sporty, but we managed to navigate around them. No lady taking our number today, hope her statistics don’t get messed up or us accused of over staying! 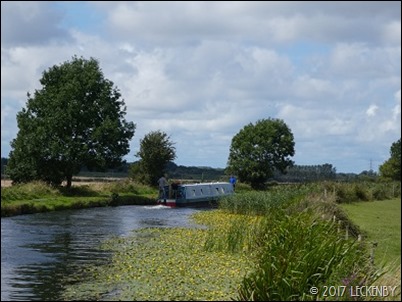 We whiled away the time waiting at the first swing bridge with a cuppa and a danish pastry each. Mike and Lesley joined us and when the bridge chap turned up we were on our way again. He showed his face just as we pulled up at Bridge 9 too, perfectly timed so we hadn’t needed to tie up. We were now on our own again. I hopped off and opened the bridge for both boats. Mike and Lesley are hoping to get to Stoke for next weekend so headed off into the distance as we moored up for the day at just gone 2pm. 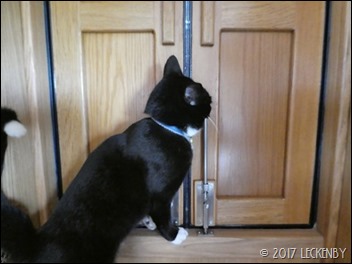 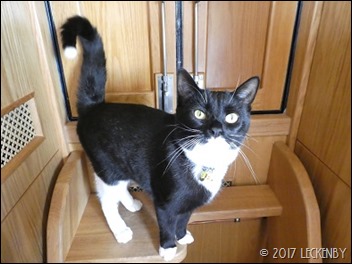 As the mooring spikes were going in and ropes tied all we could hear was incredibly loud MEOW!!!s After a whole week of being locked up they could have opened the doors a bit quicker! I had things I wanted to do. After ten minutes Tilly had made up for the last week and returned home with a large friend, who had seen better days. Lots of coming and going all afternoon. She even had a full walk of the roof for the first time ever and discovered that the life buoy was a good place to sit. 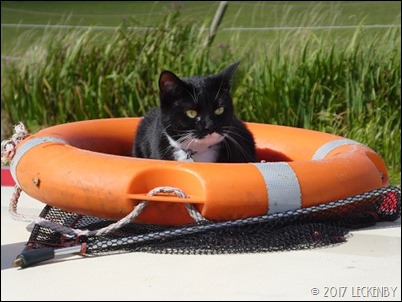 We’ve had a great time in Liverpool, our second visit by boat. There is still plenty to see and do, so we will be back.