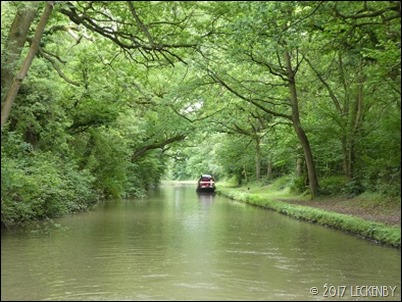 As we were about to push off this morning NB Kallista, one of the Carefree Cruising boats, came past. The last time we followed this boat was near Napton Junction last May and the people on board made very slow progress in open countryside, was today going to be similar! Along the straight before Stretton Stop we could see that we were being followed, Kallista infront, then us, then another. Did this continue along the canal, just 150 ft between boats, a constant stream. The lady on Kallista hopped off to open the swing bridge. This is only a very small pedestrian swing bridge and has a narrow approach at both ends, no space for boats to pass and is only used by the boat yard to access their workshops. After they passed through it was swung closed again, a chap crossed over and then opened it back up for us, so all I had to do was hop off and swing it closed behind us. 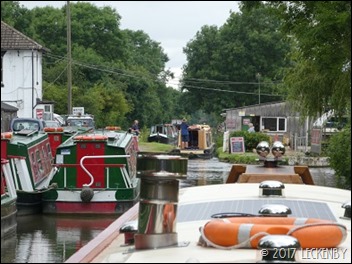 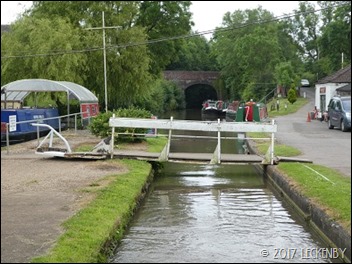 Following Kallista was very slow, their tickover past moored boats has to be the slowest known on the waterways, no bad thing. Luckily once they had passed the moored boats the revs came back up and they motored along at a reasonable pace. A few more miles with a rain shower brought me inside where I found that Google was trying to protect us. In our spam folders were emails about our house from the letting agents. A quote for works and some photos of some damp patches that had appeared last week, when will this end! So when a space with mooring rings showed itself we stopped for some lunch and to digest the quote for digging up the kitchen floor! 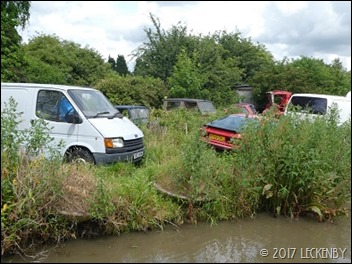 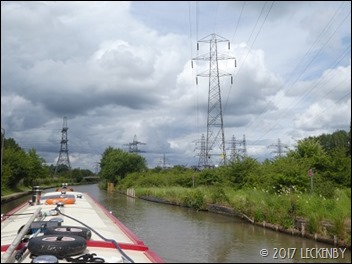 A few more miles and the pylon forest announced our approach to Hawkesbury Junction where the Oxford meets the Coventry Canal with a stop lock, Sutton Lock. Not too many boats waiting and the water points before were free, so we pulled in to top up the tank and dispose of our rubbish. We were soon joined by NB Kallista who stopped to do the same. A conversation was soon struck up as our shareboat had been with the same company. We caught up on quite a bit of news and heard that the boats currently moored at Welton will be moving to the new marina we’d moored by the other night. So no more spying WD through the hedge as we head to Crick. 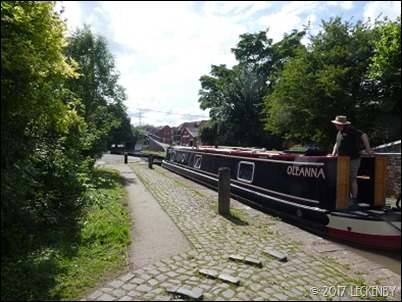 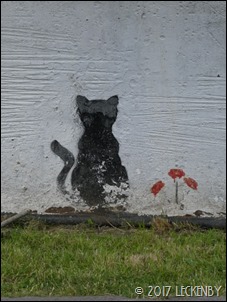 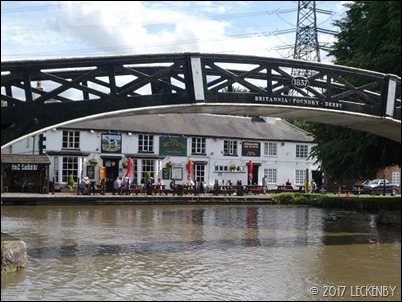 Once the water tank was full we each took our turn working through the stop lock, about a foot drop in level. Here the Greyhound pub did it’s best to call us in for a beer, but it was still too early to stop and if we could get a day ahead of ourselves that would be good. One thing that would have stopped us would have been a moored up Tench, Alarum Theatre are performing their show at the pub tomorrow and Thursday nights and it would have been very rude of us to pass them by without at least saying hello. However there was no sign, so Mick brought Oleanna round in one move, under the bridge and turning the 180 degrees onto the Coventry Canal with ease. 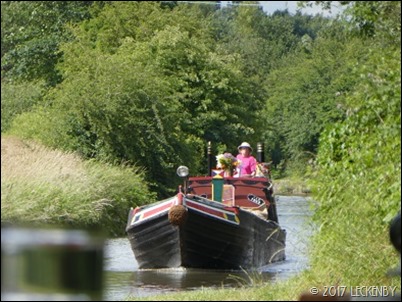 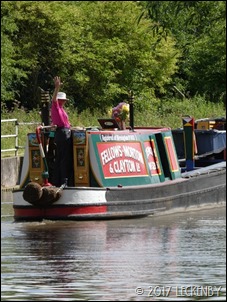 Of course once we were a mile or so further on who do we see! A narrowing with a boat coming through so we pulled over to the let them through only to see the distinct bow of Tench closely behind. We waved Heather through and just had time to say hello before the distance was too great to talk anymore. If only they’d arrived half an hour earlier, oh well. Another mile further and Kate came by on NB Morning Mist. 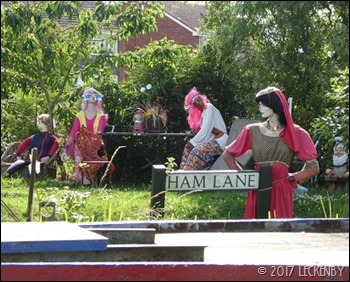 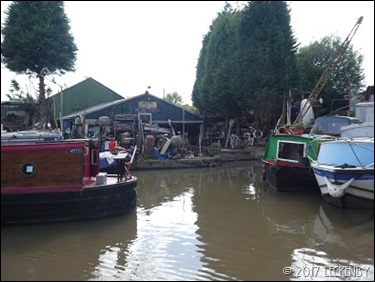 With the sloped sides of the Oxford Canal behind us the Coventry has numerous places to stop, most of the edge is Armco and having just been recently mown it looked possible to moor anywhere. But we decided to continue on and get through Nuneaton (Pooh Alley) today. All the mannequins had moved round and been recostumed at Charity Dock, well apart from The Stig. In amongst all the stuff there was actually a real human being! A first for us here and then at the corner there was actually a gap into the dry dock, admittedly only a small cruiser would be able to get through the gap, but it was still a gap. 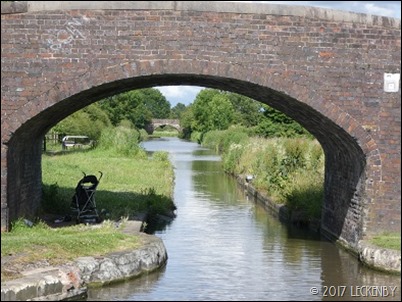 Passing the entrance to the Ashby again. We still haven’t been up there, we’re always heading somewhere else and just don’t have time to make the most of it. Maybe next year.
Pooh Alley came into view. in places like Birmingham and Leicester we tend to count the coconuts bobbing in the canal, here we decided to count the mounds left on the towpath for the unsuspecting. Have to say we were both disappointed with our count, but we could only count what we could see, there was bound to be more in the grass! Why here in particular? Well I’ll just point you back to our trip through last year. 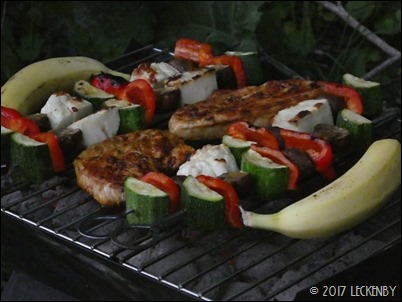 Our destination for the day came into view opposite Springwood Haven Marina. Here there is a wide towpath and plenty of trees to make a perfect cat playground for the evening. Once moored up we got out the barbecue and sat out on our chairs to have food whilst Tilly came back and forth for hours. They don’t think I noticed the bunny friends, but I did! This evening I  heard that I hadn’t been quite the right person to design the panto, disappointed yes, but it does mean that my summer won’t be spent juggling boating with making models and visiting scenery workshops. However if anyone wants a model making, I’m your girl.