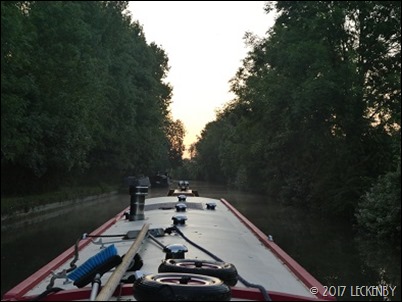 A slow relaxed life that is what we signed up for, we rarely get moving until after 10am so this morning was a bit of a shock when the alarm went off at 4.30am! But at least it was through choice and with the hope of being able to enjoy cruising. With our cuppas in hand, not in bed as usual, we pushed off at bang on 5am in a wonderful 18C, Mick even put a jumper on! 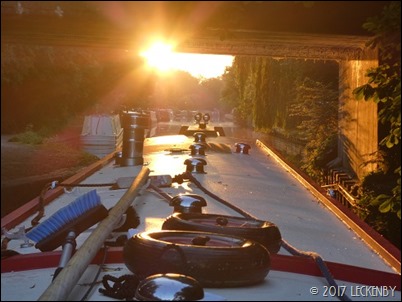 The canal had a layer of mist clinging to it’s surface and the sun was just peaking it’s way through the trees. Last night we’d been on our own, but as soon as we came through the next bridge we could see where everyone had been heading as there wasn’t a space free up to Batchworth Lock. We crept by, hoping not to wake anyone who’d actually managed to sleep. A beautiful cool morning, well worth getting up for. 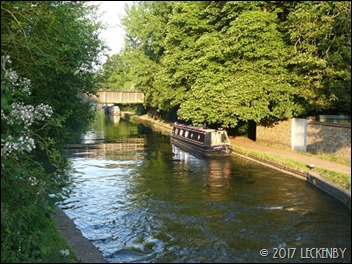 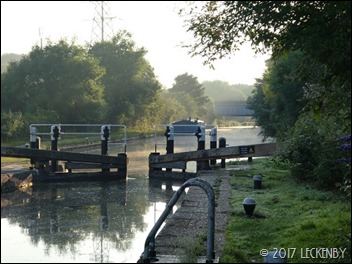 We did our best to be as quiet as we could at locks, the clicking slightly echoing around Rickmondsworth. At Arm Break Lock (Lot Mead) the sun cast an orange glow over everything below, whilst above the mist still clung to the water. On the approach to Common Moor Lock we found out how far NB Ciderapple had got last night, he was sat right in the middle of the lock landing! There was no way of being quiet if I was to hop off, so Mick fought to get the stern into the side before pulling back out again to wait for me to empty the lock. The chap on board appeared to a comment about his mooring from Mick, his reply was “We can argue about it, or share the lock as friends”. So we shared, not much was said, but to his credit he did work his side of the lock. 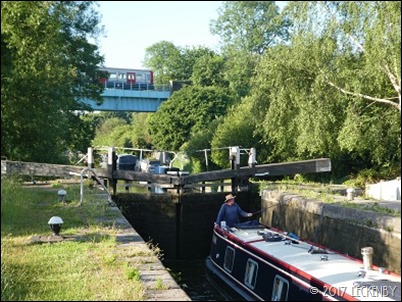 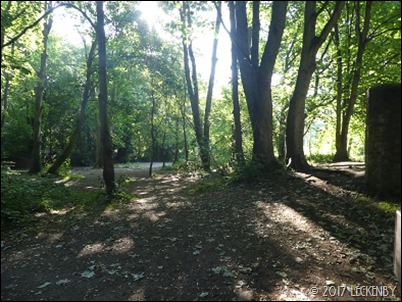 As Mick brought Oleanna into the next lock NB Ciderapple turned into the marina below, at just gone 7am he’ll have had a wait for the services to open or maybe he moored there. By now the world was waking up, tube trains rattled over the bridge below the lock into Watford, people were heading to work, taking dogs for walks. It was still too early to stop at Cassiobury Park, all those trees wasting away not being climbed! There wasn’t much space to stop anyway. The bottom chamber of the next two locks was full, it’s meant to be left empty as it floods the property next door, and a boat was just pulling up at the next lock. It soon became evident that the boat ahead had novices on board, very nice novices, one of whom walked back to tell us as much and that they were waiting for us. 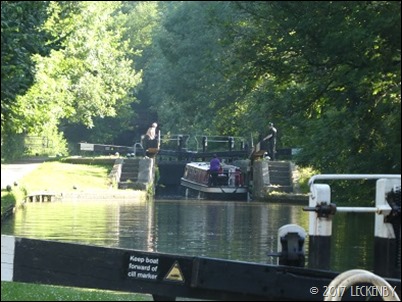 We’re not sure how they had managed to get this far since Saturday from Tottenham as prior to this none had stepped onto a boat. They hadn’t worked out a rhythm of working the locks and had no hot water for showers. After both of us suggested that they loosened off the centre rope they  realised that passing it round a bollard and then back to the helm would be safer. I tried to explain how best to work the Grand Union Locks, but they were too busy explaining how they had been doing them. But then if they felt safer working them their way that was more important. 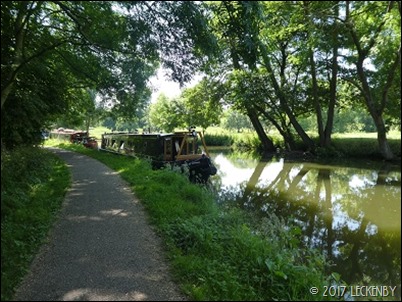 It was now nearly 9am and the trees on the bends by Grove Mill pulled us in. However we were still in the sun, walking up ahead before we tied up I found a space that was 3/4 in the shade so we nudged round there and settled down for breakfast. All the doors were opened up, so Tilly went for an explore, returning after about an hour. By now the sun was starting to work it’s way along the cabin roof, so Mick went for a walk further along and found a space with trees on both sides of the cut. With Tilly inside we pushed off and move 0.18 miles to the shaded spot on a slight bend. Oleanna wouldn’t come in fully, but that didn’t matter as we had good shade. Moored near the green of hole 4 and the Tee of hole 5 we had plenty to watch as golf buggies zoomed along the track from ball to ball. There was even a tuck shop buggie that came round for refreshments. Well at £165 off peak for a round of golf you’d expect no less.

In our shaded mooring I got on with sorting my folio. A huge batch of production photos arrived from a photographer in Scarborough which meant I now had a lot to sort through. Several hours of work and I’m now at the point of reducing what I have. A big thank you to all those who’ve helped with photos, considering last week I only had about six pictures of my work, I now have over a hundred, so I can pick and choose what I show now. 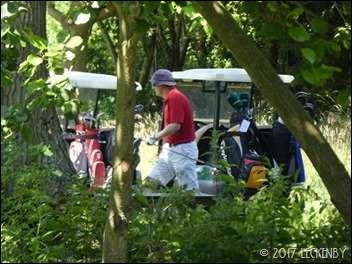 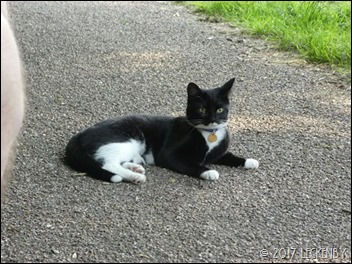 Mick sat out on the towpath bimbling away the day whilst Tilly was extremely busy in the undergrowth. At one point she discovered that she didn’t have a private wood and that she’d have to share it with another boat cat. There was no point in arguing over a few trees and friends. So we made sure that we were both aware of each other, had one hiss and then slloowwly moved away, just in case! Boats came past with hot people on the sterns looking jealously at our shady mooring. One chap pulled up behind us and has every intention of moving up when we push off tomorrow. 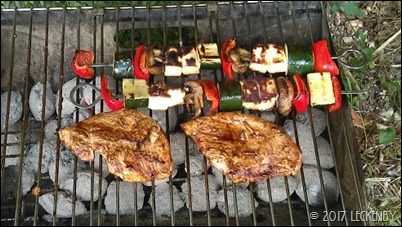 This evening we have had our first barbecue of the year. Slightly reduced rations compared to normal. Sweetcorn, veg and halloumi kebabs, turkey steaks marinaded with ginger garlic, soya sauce followed by bananas, sadly without chocolate!