Time to make a move and get back to boating. We pushed off just before 11am just as the trip boats were starting to go back and forth and the punt was making it’s way to Camden. It was a nice mooring, handy for people to find us, no breasting up allowed, just very busy on a weekend! 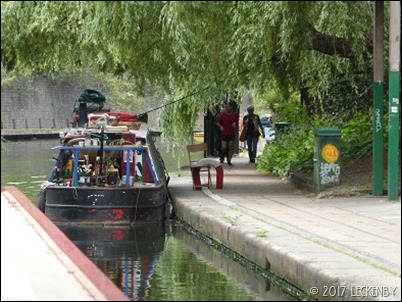 We pootled our way back through the zoo to Little Venice where we pulled in to fill with water and do all the necessaries. On our first visit to London on Lillian we’d managed to pull in behind the cafe boat without blocking the canal, but today even though we are a foot shorter we stuck out too much, so had to pull through the bridge and breasted up alongside NB Wandering Swan whilst he finished filling. He hoped that the space we’d just left would still be available, not much traffic had come from this side so he might have been in luck. If he succeeded it would be his third time of mooring there in seven years, I think we were very lucky.

We’d already done a dishwasher load before we’d pulled out this morning and then the washing machine went on. Filling up took sometime. All the rubbish was disposed, one yellow water tanks worth was emptied and then a second one, two buckets emptied too and Tilly’s pooh box had a clean. With everything done we pulled out just as a really short boat pulled up, perfectly timed. 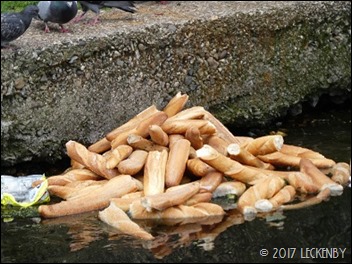 Boats seem quite familiar to us now as we spotted several that had been moored near to us over the last three weeks. Coots and swans were parading their growing offspring , but only the pigeons seemed keen on the Baguette island that had been left by someone. How ridiculous, it will only encourage rats!

At Ladbroke Grove we pulled into the shopping mooring to pick up a few things at Sainsburys, our wine cellar had been looking decidedly empty so a stock up was needed. Mick stayed on board whilst I did the shopping not wanting to leave Oleanna on her own. After a bite to eat we carried on getting further and further away from central London. An elderly couple asked us where we’d been moored, they seemed to have quite a good spot, admittedly on pins but they hadn’t had to breast up. There did seem to be quite a few places where we could have pulled in, but we wanted to get further out today. 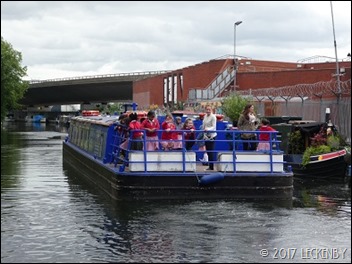 Encountering the Electric Barge just by moored boats meant we had to pull in as far as we could on the off side. It took the chap an age to come past with his boat full of red uniformed school kids. Close behind was a boat following at tick over, he was really looking forward to his slow slow journey! Little did we realise but a similar thing was about to happen to us. 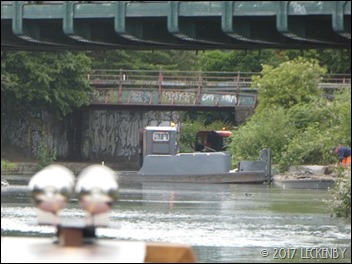 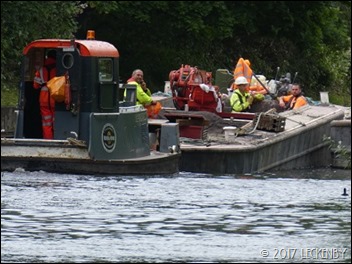 Ahead we could see two flashing orange lights, one was on a tug that was at 90 deg to the cut pushing a skip boat to the side. There was enough space for us to get by only to catch up with another tug pushing another skip  with a crane and four passengers. Their progress was extreeeeemely slow. It was handy that Mick kept wanting to clear the prop as this slowed us down so as not to get too close. Slowly they carried on for what felt like miles and miles. They didn’t pull over to let us pass as they were most probably too deep to leave the central channel, so all we could do was slloooowwlly follow. 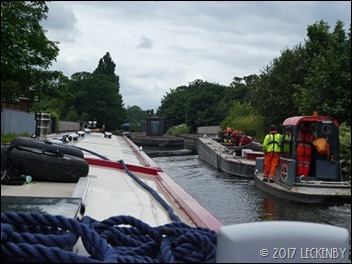 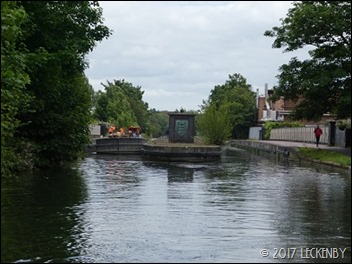 As the North Circular aqueduct got closer they beckoned for us to pass them, they were taking the starboard channel so we took the port and opened up the throttle. Both boats entered the channels at the same time, but we zoomed compared to them and easily won the race to the other side. We were just clearing the central island as they had just got their stern alongside it on the other side. They were almost certainly heading for the towpath works at Alperton, possibly with a boat full of tarmac to start surfacing it. 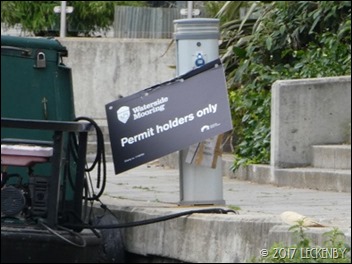 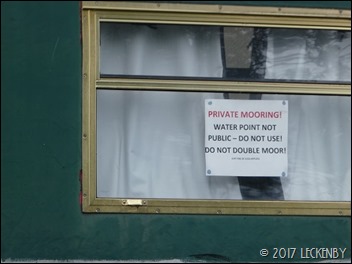 There was a boat moored up where we’d topped up with water on our way into London. Large signs declared that the moorings were for Permit Holders only. Signs in the boat informed us that the water point was not a public one. Here there are going to be what looks like four moorings, each with electric and water and at the end is an elsan point. There is nowhere to tie up to to be able to use the elsan, so mooring on the towpath side and then carrying your offerings over the bridge must be the way that it will be used, unless of course it is only for permit holders too! 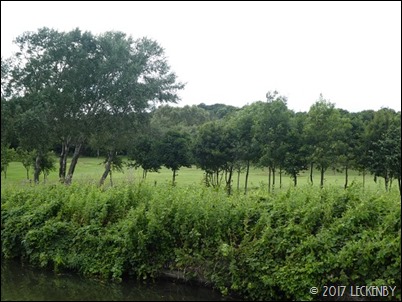 The golf course at the foot of Horsenden Hill came into view and as we cruised round the bend a space showed itself so we pulled in. The time we’d spent following the tug had meant that we wouldn’t make Bulls Bridge today and anyway here was a much better place for Tilly to make some friends. She made no hesitation in crossing the towpath and disappearing into the sideways trees.

1 thought on “Race Across The North Circular. 12th June”