Oleanna seemed to be hitting the side this morning for no apparent reason, no passing boats, no strong winds. She also had developed a bit of a list as we were also sitting on a bit of a ledge. Normally we would think that maybe the pound was down a bit, but this pound stretches all the way to the top of the Hanwell flight, Cowley Peachy and Paddington, so a few lock fills wouldn’t make that much of a difference here. Mick pushed us off the ledge only for the trip boats to wash us back onto it. Another factor might be that we are lighter, less water and less diesel so it’s easier to push us up onto the ledge. 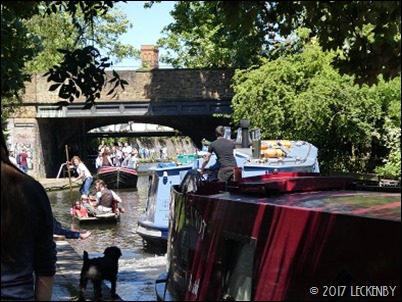 A big shop was needed for supplies for Sunday dinner so we walked up to Morrisons and filled several bags that then needed the whole of the fridge rearranging. There were a couple of things that they didn’t have so I ventured back out to Sainsburys which is near the bottom of the three locks. 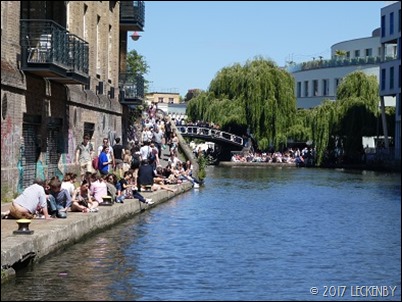 My god I knew it would be busy, but not this busy!! Trip boats, punts and the seafood widebeam were all jammed by the next bridge. The chap at the back of the punt didn’t seem quite so cool as the chap who’s been at it all week and he was having difficulty avoiding the canal side and other boats, yet the fella singing and playing at the front just carried on as if sat in a chair on terra ferma. People lined the edge of the towpath to eat their street food from Camden Market and the bars by the lock were almost over spilling into the canal. Both lock chambers were in operation today and there were four volunteers waiting  for boats. I maybe made a mistake by walking towards the tube station, here it was just as busy. I’m used to walking at a slow pace, rarely do I race along a towpath, but the pace of these meandering tourists was deathly! Once on the other side of the tube station I could walk quicker at my leisure. I decided to return to Oleanna via the canal hoping it would be less crowded. This worked until I got nearer the locks, luckily there was another line of people dangling their feet over the edge to stop me from falling in as I passed crowds. 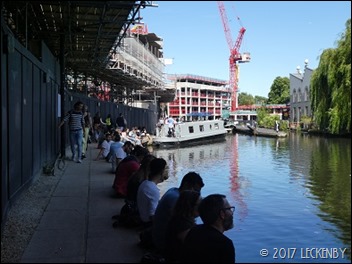 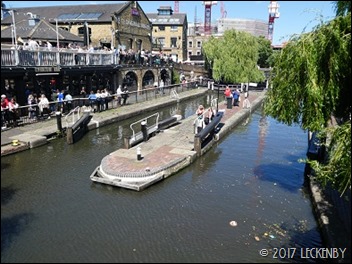 Two girls sat down just above one of the locks as I walked by, they dangled their feet as a narrowboat was trying to manoeuvre right next to them. The sound of the engine and the chaps quiet voice meant they didn’t hear his warning, so I leaned over and suggested they should move their legs pretty sharpish, which they did. I’m so glad we weren’t going through the locks today. At the top lock I can imagine gongoozlers congregating on two levels on all sides, no wonder there are railings all the way round. 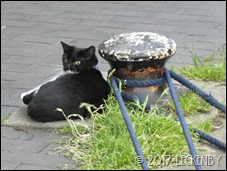 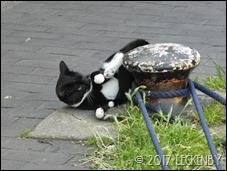 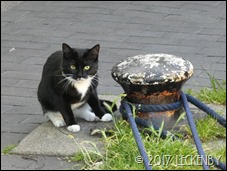 With us both back at the boat Tilly was allowed out to explore. With a wave of braveness she ventured onto land to inspect the trees and wall. This wall is rubbish, how are you meant to be able to climb it! It is far too smooth. She showed her distain by shouting at it time and time again. Rubbish!!! The rest of the afternoon she has spent her time trying to be photographed as much as possible, except there was competition from next doors cat. He or she is far more gregarious and quite happily walks up to tourists and curls itself around their legs, whereas Tilly stays on the boat well out of arms reach. Once the competition had gone back inside Tilly lost all her inhibitions and was on the towpath making sure that she claimed it all for herself. I’ve never seen such acrobatic scent marking and no-one was going to stop her! 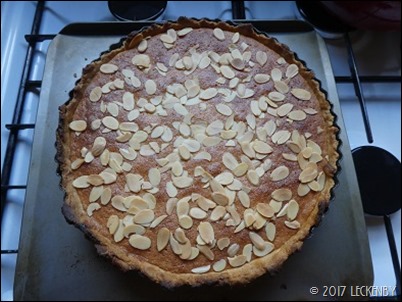