Our cruising has brought us to Sheffield. The hope some weeks ago was that Oleanna would be ready for us to move on board in Sheffield, do the few jobs to Lillyanne that were needed for her to go on the market and head off into the sunset on our shiny new boat. But her build can’t be rushed and at the moment she doesn’t have an engine to be able to sail off anywhere.

Instead we made use of the time to do some of the jobs on Lillyanne and visit Oleanna.

Ken was about and with a bit more info regarding an MPPT controller from Victron,which has six settings the sixth being for Lithium. This is cheaper than the one Mick had found. Ricky had figures for us but the battery price needs checking as it may now be out of date. Once we have this we can finally make our minds up.

It was decided that having the PV panel on site along with speakers, radio etc would now be useful. These would all be extras so we will order them for delivery to the yard.

Kris was on hand as always with questions for us. Today was mostly about shelves inside the bedroom cupboards. I’d asked for a couple of drawers to be put in my bedside cupboard, I’d intended that these should be low down, making access to the very bottom of the cupboard easier, but they had gone in the top. Kris will move them down. Most other cupboards require a couple of shelves.

The drawing I’d done for the herb rack had one bit of information on it that had led to a misunderstanding over depths. So today I’d brought along my smallest and widest pots to try. Two of the racks were fine, but the third was just a bit too narrow. Kris will alter this for us.

Sockets in the bedroom will be swapped for those with USB charger sockets as well as 240v. 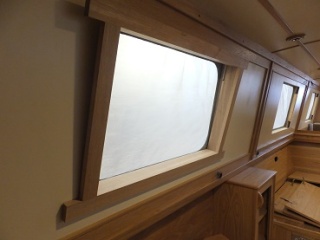 They are still waiting for the windows to arrive, this means that the internal linings can’t be fitted as yet. But Kris had started on one which was in position in the saloon. 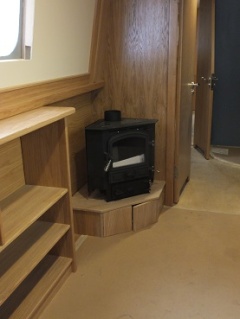 The corner Bubble Stove had arrived and was sat on top of a small cupboard. Our current stove sits on something similar, which means that you can store all the fire lighting paraphernalia inside out of sight.

The surround and flue are still to be sorted all to meet with the Boat Safety Scheme. These stoves normally come with a fiddle rail which stands above the top surface. We have gone for one without this so that we can stand a kettle and cooking pot on top.

We will need a narrower coal scuttle if we want it to live next to the stove. 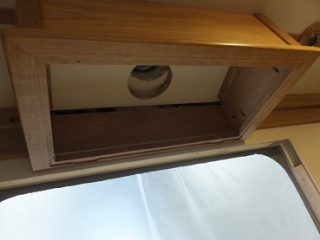 A hole has been cut in the ceiling above the extractor in the galley. This will have a mushroom on the roof.

We chatted about a bathroom cupboard and mirror above the bathroom sink. It was decided that it would be nice if it mirrored the shelf unit above the toilet and had one opening door that could be mirrored.

Sighting of a longer mirror was chosen on the side of a bedroom cupboard and dimensions were taken for the mirror to be ordered.

Things are starting to happen in the engine bay. The calorifier was in position with pipes coming from it for heating and hot water. On the wood below are pipes for deisel, leading both to and from the engine. 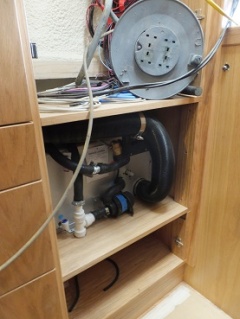 In the starboard rear cupboard the Alde Boiler had been installed under what will be the electrics cupboard. This leaves a small area below it for something.

The Alde Boiler came with a roof flue to fix through the roof, but this would come out inside our pram cover, so a skin fitting had been bought and fitted. However the fitting is fixed between the two rubbing strakes on the gunnel at the stern, which is where the greatest impact is on a boat. The fitting is plastic and protrudes further than the rubbing strakes. A couple of solutions were talked about, one of a metal strap over the flue to protect it. But this would be even more proud and have the possibility for catching in a lock. Bolts could be used to hold the strap in place that would shear off should the need arise.
More thought on the matter is needed as we are not convinced the flue would last long in it’s current position.

The blind that we had been thinking might be a possibility for the bedroom doors can’t be used. There is little space for it and also the front door handle is quite deep, so any window covering needs to be fixed to the doors. We have three options, narrow blinds, separate curtains for each window or bungs. Something for us to mull over.

A second visit before we left Sheffield to take some measurements for possible narrow blinds and to see if any more samples had arrived to look at. 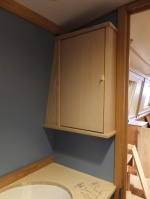 Kris was busy fixing the navigation lights onto the cabin sides.

He had also made the bathroom cupboard which was fixed in place to look at. This will give us somewhere to store drugs etc and have a decent sized mirror on the door. 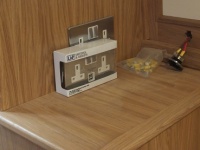 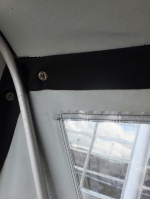 New sockets were waiting to be swapped. Some samples had arrived for the cratch and pram covers. There was a good blue that would compliment Oleanna’s exterior blue, but none of the samples had a pale backing to them. We are quite keen on a pale backing as on our current covers as it keeps the well deck and stern quite light. So more samples are to be sought.

Dimensions of the front door windows were taken. A hunt for some narrow blinds will be made. So far the narrowest I’ve found are 30 cm wide, these need to be at most 20 cm! Separate curtains would be a bit Grannyish and bungs we would have to store somewhere.

The prices of the Lithium Batteries hasn’t changed so we have given the go ahead.
The boat is going to be a 24 volt boat so we are going to have 2 x 24 volt 50 amphour batteries wired in parallel. This will give us 100 ah at 24 volts. As it is 24 volts this is equivalent to 200 ah at 12v. With lead acid batteries you can only discharge them to 50% capacity but lithium batteries can be discharged to about 90% without damage and they turn themselves off before you can damage them anyway. So in theory we will have the equivalent of a 400 ah 12 v battery bank. The time to charge to full capacity is much reduced compared to lead acid batteries and with a 250 watt solar panel connected we are hoping that engine running just to charge the batteries will be much reduced compared our current boat.  Hopefully with our first few months on board being in the winter we should soon find out if an extra battery is needed. Space is being provided for one. We are hoping that the longevity of the batteries (hopefully 10 years) will meet expectations and that we won’t need to buy new batteries until 2027. Watch this space!

An extra 240 v power socket will be put in a rear cupboard so that we can charge our handheld vac. This will be on the back of one of the galley sockets.

We raised the subject of the Alde flue again as it is concerning us. No matter how careful we could be mooring, the flue in it’s current position will not last long. Even with a protective strap across it it will get damaged. Our preference would be for it to be recessed and have a strap guarding it too.

Other fabric samples still haven’t arrived and Julia hadn’t heard back from Tucky’s about where would be a good place to launch Oleanna near Manchester.

Winter stoppages mean that we need to start moving Lillyanne across the Pennines, so we will be getting further away as things are completed.

3 thoughts on “Two visits in one week”