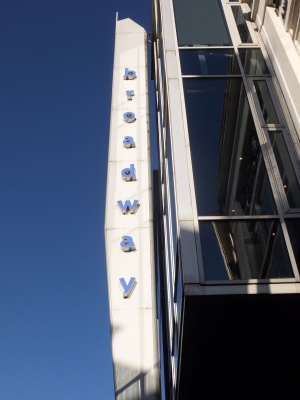 The Broadway Cinema, on Broad Street in Nottingham is an independent cinema. Every Thursday morning and early afternoon they have a Silver Screen showing of one of the films that are currently on. Today was Stan and Ollie. We could either go at 10.30am or 1.30pm, it being a 25 minute walk from our mooring we chose the later.
Unfortunately it turned out these screenings are very popular, or maybe it was just this film. Your hair doesn’t have to be silver or have a lack of hair to get in, everyone is charged £5 no matter what your age, you also get a free cuppa with your ticket. Today however the film was full, they were showing it on two screens. We were disappointed, but were handed a voucher each to be able to see the film at the same price at a different time, brilliant! We’ll return.
The Favourite had also caught our eye, so as we’d made the effort on a chilly day we booked for the next showing. This left us with sometime to kill, so we had a wander around town.
I have a voucher for The White Company, we had a look around their shop. Just about everything in the shop being white isn’t the best thing when you have a cat who doesn’t understand about wiping her paws. They do a range of crockery which was interesting but they didn’t have much stock, thankfully they have a click and collect service. So some perusing of the website is needed.
Next we went into Whittards to stock up on my morning tea, which is actually their Afternoon Tea. They only had it in tea bags which just isn’t the same. We asked the ladies in the store if my tea (that I’ve been drinking just about every morning for decades, since I was a student in fact) was still available in loose leaf. As far as they knew it was only available in an Alice in Wonderland tea caddy, but they did have some old stock which was reduced, thank goodness! The tea caddy is £11 and I already have a caddy so spending the extra £5 just to be able to drink my tea in the mornings is not on. We bought four packs and I have since checked their website, it is only available in the caddy. I have sent them a stern email hoping that I’m not going to have to remove some of Oleanna’s ballast and replace it with what old stock I can find.
Back at the cinema we weren’t expecting to be sat with too many people, but the big comfy seats got fuller and fuller. Maybe there were others like us who’d made the effort to come into town and not managed to get to see Stan and Ollie, so got tickets for the next film.
Set in the early 18th Century as Queen Anne’s health is deteriorating, her friend Lady Sarah tends to her needs and advises her over the war in France. Lady Sarah is the wife of Lord Marlborough of Blenheim Palace fame. Sarah’s cousin Abigail, once a lady in her own right, arrives hoping for a job in the palace and soon she wins the Queens attentions and maybe affections. Olivia Colman is superb as Queen Anne, Rachel Weisz and Emma Stone aren’t bad either.
Filmed mostly on location at Hatfield House the settings are historically plush and the mens wigs so large. Yorgos Lanthimos’s use of natural lighting is wonderfully atmospheric where in the night time scenes the only illumination comes from numerous candles. It really gives you a feeling of what life was like before gas or electric lighting. A funny, wicked and filthy film, no wonder it is turning heads at the awards.
Is anyone else having hassles with Open Live Writer? It won’t let me upload photos in a post.
0 locks, 0 miles, 10,000 steps each, 4 pouches tea, 1 voucher still unspent, 2 much white, 2 vouchers, 0 cuppas, 1 full, 1 OAP at the flicks.