Gloucester Docks to Sims Bridge
Over the last two and a half years we’ve been getting our internet through EE. We’d come across a Black Friday deal that gave us 50GB a month for £25 which we jumped at. 3 who we’d been with before couldn’t compete with the deal. Gradually EE has increased the tariff, now £29.03. So when Mick came across a deal with Virgin it was worth looking into.
For a limited time (ending today!) Virgin were offering a Sim only deal for £20 which would give us 100GB. It looked like it was only available on line and the sim card would have to be sent to our billing address, in London. Not ideal, but we will be seeing my brother in a few weeks and the saving we’d be making would pay for having two sims within a couple of months. So we decided to see if it was possible to get the deal in store , luckily there is a branch here in Gloucester.

The very nice chap said there was no problem with doing it all in store and sorted it all out very quickly for us. Credit checked and sim card handed over we now have an abundance of data available. It took a little bit to get our EE contract cancelled, which actually involves 30 days notice. So for the next month we will have what ever data is left on our EE contract and a full 100GB on the Virgin sim. Anything that hasn’t recorded perfectly on our PVR will be down loaded instead, just because we can.

With that all done it was time to visit the services. For this you need to pass through one of the 16 moveable bridges on the Gloucester and Sharpness Canal. Many of the bridges are high enough to just cruise straight through, but others are far too low to limbo under. Before we pushed off Mick called the Bridge Keeper at Llanthony Bridge to ask to pass through. We were told to approach and wait for the green light before passing through. 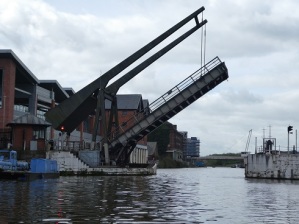 It being quite a busy bridge both with traffic and pedestrians a suitable gap was waited for, then the barriers came down and the bridge started to lift. I often wonder when using  a lift bridge whether it’s better to lift it all the way of just enough to pass through. Here they automatically open the bridge right up, so high that it looks like it is about to fall over backwards. We got the green light and we were soon through. Oleanna was winded almost straight away and brought in to moor at the services. 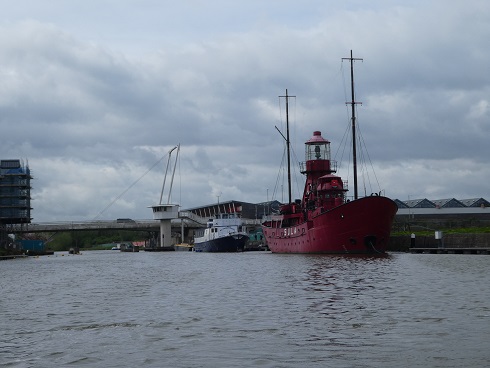 Whilst the water filled, we emptied the yellow water tank and disposed of our rubbish. Mick found an Elsan in the little hut up the ramp next to the bins, so no bushes were going to get a treat from us today.
Next we winded again and pootled up to Sainsburys. Here there is a 4 hour shopping mooring which we made use of to stock up a bit for the next few days, only two boxes of wine!
Over the last few days we’ve been trying to find a suitable mooring for Finesse to visit us. Ideally we wanted somewhere close to a road, somewhere to park a car or van and some friendly cover for Tilly to play in. With the assistance of Google Earth, Street View (of which much of the towpath has been covered) and Waterways Routes maps we had short listed a few places. The closest we could get to a parking place the towpath would have been level with the roof of the boat. Other moorings were by bridges, they had parking places on the off side and a bit of a distance to where we could tie up. So we set off to see which would be best.

The new housing estate had plenty of parking, but the towpath was as it looked on Google too high, also Tilly wouldn’t have felt comfortable there. So we carried on. 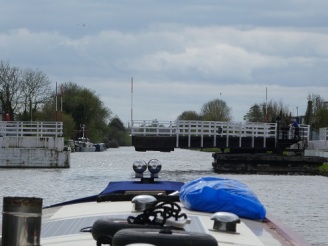 A call to Hempsted Bridge was made. We could see the Keeper rapidly doing various things on the bridge, then run over to lower the barriers of the off side. Here there are few buttons to press, much of it is done by hand. Once the barriers were down and locked in position he could then wind the bridge open. It took a bit to get going, but once he’d got the momentum up he easily turned the handle. Reaching into a box he turned the lights to green for us to pass. When we were through he did the whole process in reverse to close it, only for a trip boat to want to come through a couple of minutes later. It looks like quite a work out being on Hempsted Bridge.

No such problems at Netherbridge Swing Bridge as there is 14ft 9’’ clearance. This and other high bridges are not manned fulltime as they only need to open when tall ships pass through. Round a couple of bends and the next bridge, Sims Swing Bridge. The light was flashing red and then it turned to green for us to pass even though there was masses of clearance. Just on the other side there was what looked like a gap nearest the bridge for us to pull into. We checked with the keeper that we were allowed to moor there, as long as we were past the bridge lights it was fine. There was sufficient space for us.
Mick walked up to check on the parking situation by the bins. There was enough space for a couple of vans, first come first parks. Our coordinates were emailed off to Finesse and we waited to hear back. A couple of hours later we heard from Chris/Kev, they would be on their way at 5am.