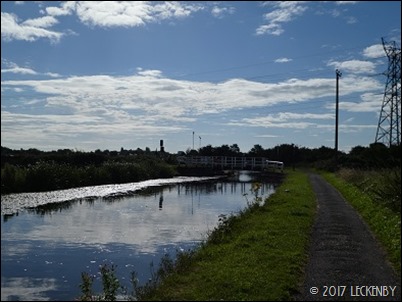 By the time we went to bed last night we were surrounded by boats. All six boats going into Liverpool today had chosen to moor at bridge 10 along with one that had stopped on it’s way out. With Bridge 9 Hancock’s Swing Bridge only being able to be operated by C&RT staff we felt no need to rush to be at the front of the queue so had tea and breakfast as normal, well a little bit earlier than normal! The first boat moved off at 7.20am and by the time we stepped outside the bridge in front of us was being swung for the last two boats, leaving us on our own. We soon moved off, opened the bridge and cruised just over a mile to reach the rendez vous point with C&RT. There was enough time to chat with the two boats ahead before the chaps in blue arrived to give everyone the low down for the first part of our journey. 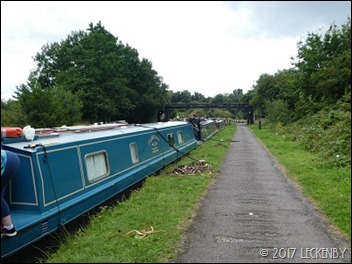 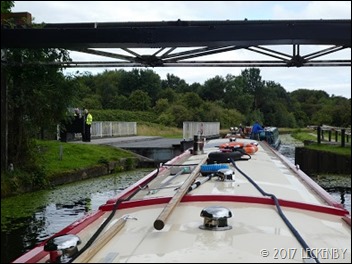 The link passage is manned by bridge keepers and a second team of lock keepers. Bridges 9 and 6 are only operable by C&RT staff and they are opened twice a day, once at 9.30am for those heading in to Liverpool and at 1pm for those coming out. You can do this stretch without going into Liverpool and stay at Eldonian Basin or Litherland, but then you’d miss out on the fantastic journey through the docks. 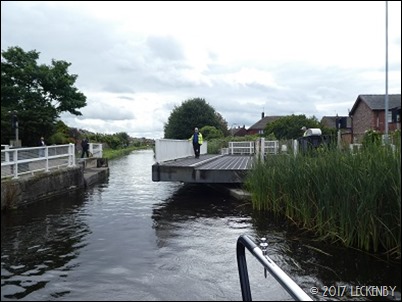 When the bridge opened we all filed through in line, a flotilla of six boats with us bringing up the rear. It was slow going at first, so tickover or neutral was needed until spaces appeared between us. The yellow lilies still gave us a channel to follow even though the flowers hadn’t opened up to view the sun yet. After about 40 minutes we approached Netherton Swing Bridge which opened as we got close, the others had had to wait for us stragglers. 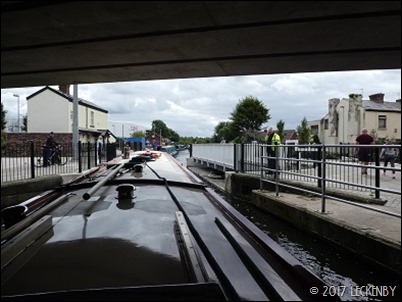 Through housing estates the canal wound. One lady seemed to be tending her garden as we passed, but she stopped, sat down and opened a large book to make a note of our number and name. We wondered if she has a spread sheet so she can see if people have been before and how long their stay had been. In the last half mile or so to the Litherland services boats started to come towards us. Two had ladies who were ever so enthusiastic about the experience.
We pulled in so that we could dispose of our rubbish and give our wee tank an empty. Our tank gets emptied every three days and we have a large black container that we can use to store our yellow water in. So we hope that we will be able to stretch to our full stay without having to pay the elsan price at the marina. By the time we’d finished we were still at the back, the other boats all having disappeared into the distance a few minutes before. The bridge team had said that we should aim to leave Litherland at midday to make the locks in time for 1pm, we had five minutes in hand. 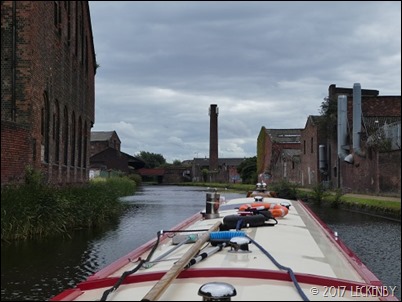 Parks and houses now get replaced with disused warehouses and waste land and so many plastic bottles, Lucozade have a lot to answer for! As you pootle through Bootle the bridge numbers end at 1 and get replaced by letters. After bridge C we turned right to meet the other boats waiting at the top of Stanley Dock Locks and breasted up with NB Lady Baltimore. Mike and Lesley are from the States and this year bought an ex-Black Prince hire boat to cruise the canals for 8 months of the year, returning to the States for winter. They were to become our locking buddies down to the docks. 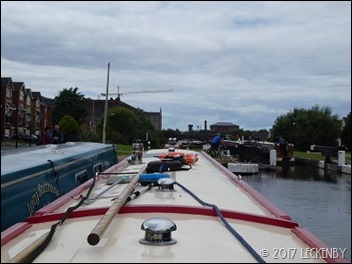 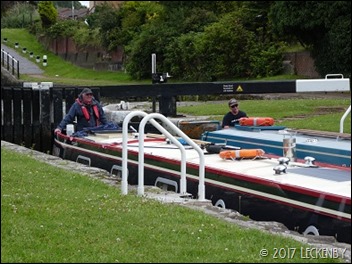 This is where the Lock Keepers take over. The first two boats to arrive had entered the top lock, but could go no further as the paddles to empty it are different. The paddle gear has a long tube attached to it and the lockies windlass has a longer handle to compensate for this and a socket on the end. When the chaps in blue arrived they started to lock the boats down two at a time, us being in the last pair. There was no rush, we all had a designated mooring for our stay and everyone would have to wait for us before being let down the last lock of the link. 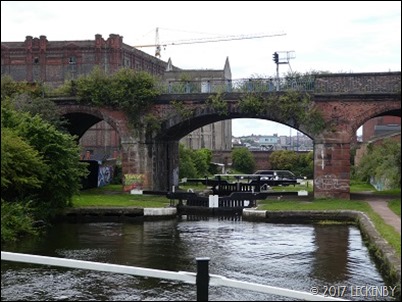 Stanley Dock Locks were built some 70 years after the Leeds Liverpool Canal opened, prior to them being built any cargo heading to or from the Mersey docks would have to be moved by horse and cart. The locks were built wider 14ft 9in so that Mersey flats could access the canal level some 44 ft higher than the docks. 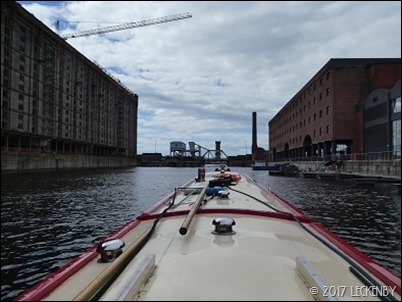 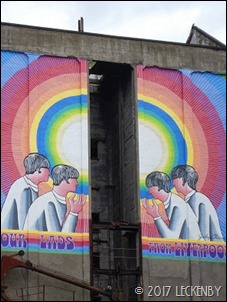 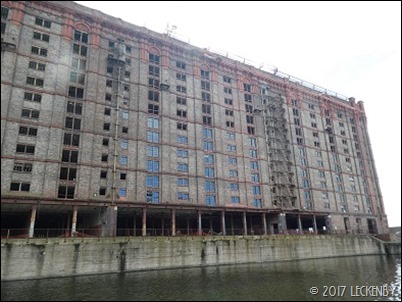 We made our way down with one lockie following and locking up after us. Then at the bottom lock Lesley and I got back on board to be let down by the men in blue. Five years ago we did the trip, we still listened to the chaps with their directions and were told that they would meet us at Princes Dock Lock, which the other boats would have worked themselves. We were also told to look back at the grain silo as we passed into Stanley Dock as there was a mural celebrating a track from the Sergeant Peppers album, but which track? 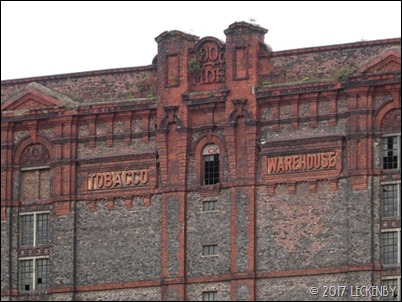 In the last five years some things have changed, the buildings on the north side of Stanley Dock have been changed into  The Titanic Hotel and pontoons sit waiting to be filled with boats. At first look the giant Tobacco Warehouse still looks as dilapidated as it did in 2012, every window broken. Well that is until you get to the far end where new windows are going in starting on the lower floors and working outwards. The building was built for storing tobacco and the floor levels far too low for an easy conversion. So some major work must be going on inside to make reasonable head room. It is a stunning building. 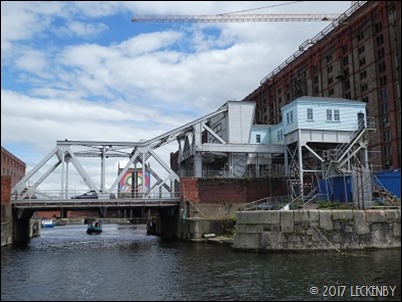 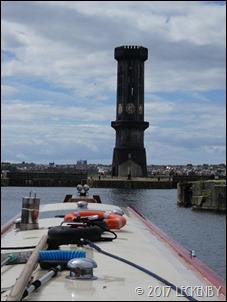 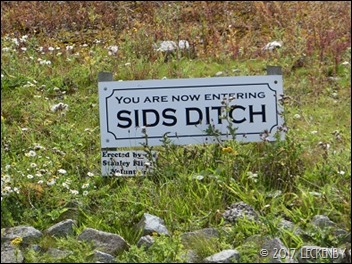 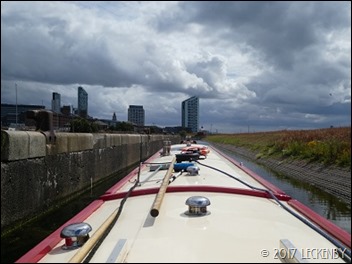 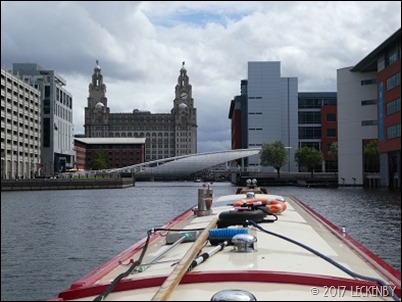 Under the Regent Road bascule bridge and past the blue shipping container where you turn left and into Sid’s Ditch. This area still smells of the activity that used to once go on here along with dust, but now is a desolate  prelude of the sights to come. Buoys to the right and then buoys to the left. Then the Liver Building comes ever closer with it’s birds over looking the Mersey from high. What a sight. A large cruise ship was billowing out black smoke on the Mersey  as we pootled our way under the modern footbridge. 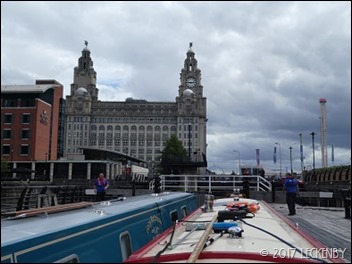 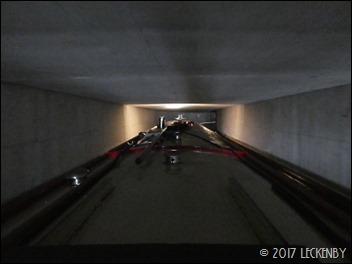 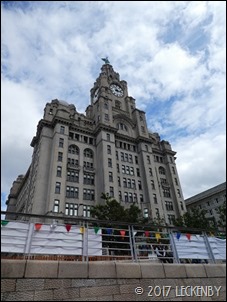 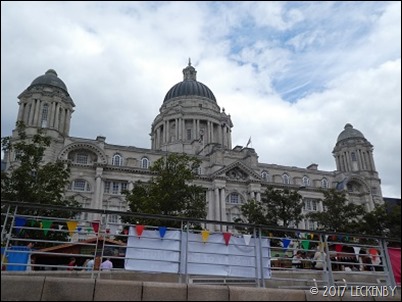 The lock was waiting for us to enter and once the gates closed behind us we were instructed to turn our tunnel lights on as ahead there are three sections of tunnel. Low flat roofed like a letter box. We’d bob back up for air to see the Three Graces up close (The Royal Liver Building, The Cunard Building and the Port of Liverpool Building)  before the next section of tunnel and then the final one which pops you out into the modern world. Here we joined the rest of the boats waiting for the Lockies. Gongoozlers everywhere, Mick even had a request for a photo stood on the back of Oleanna, photo yes but not on our boat! 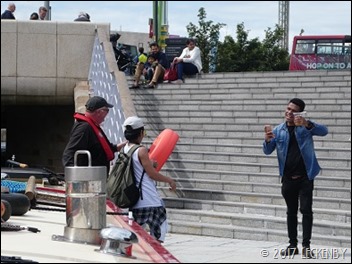 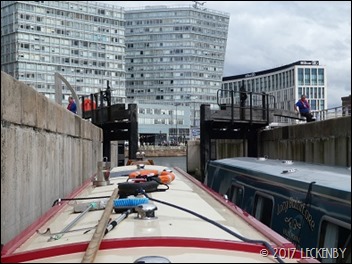 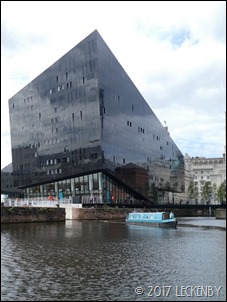 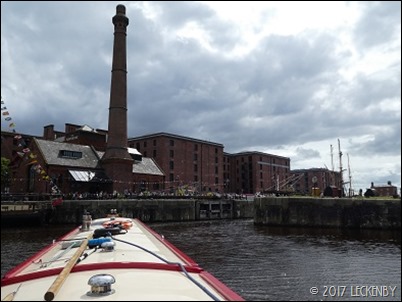 The jolly Lockies checked we were having a good time and were enjoying the views as they locked us down into Canning Dock. Once we were given directions and horn instructions we did the big u turn through the dock, past several tall ships and turned into Albert Dock, then through the bridge into Salthouse Dock. Here there was a bit of a hold up. Our mooring was almost straight ahead and being a reverse layout boat we wanted to head straight in, but those with saloon at the bow were winding to reverse in. Lucky for them the wind wasn’t a problem, just getting turned  seemed to take forever. Once our mooring was clear we slid in and tied up, hose out to replenish our almost empty tank, hook up plugged in for free electric and the washing machine on before a very late lunch. 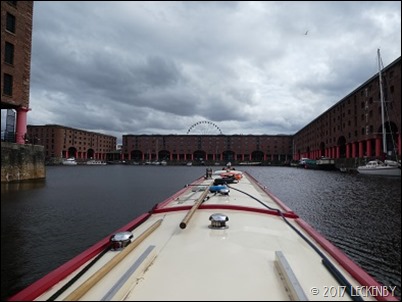 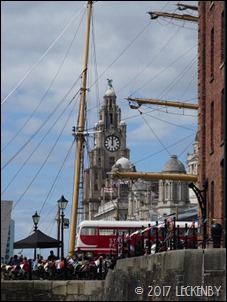 The rest of the day we have done more washing, drying, dishwashing and tried to keep Tilly amused. The proximity of a three lane road, admittedly up a high wall (although that’s not stopped her before!) and being on pontoons with no way out of the water for a cat, may mean she has a bad week in Liverpool. I shall just have to dream of Bridge 10 and the rain instead. Hang on, a week! A WEEK!!! 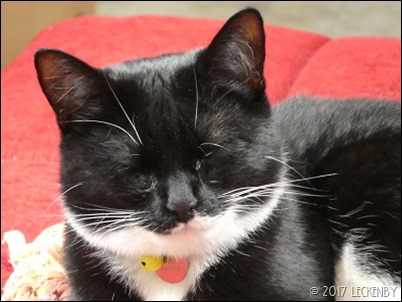 2 thoughts on “A Pootle Through Bootle. 29th July”