Dunham Massey to between Boothstown and M60
With quite a lot to achieve today we had planned to make an earlier than usual start to the day, which we managed but not quite as early as we’d wanted, but in the end our timing worked out to be quite fortuitous. 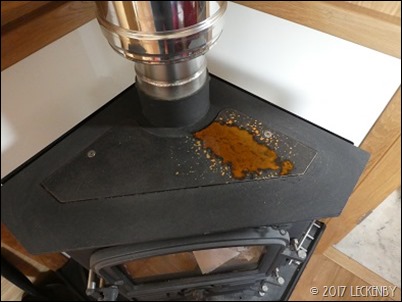 The rain had been quite constant last night and this morning we noticed a new thing to add to our snagging list for Finesse. Somehow water had got into our chimney and worked it’s way down the double skinned flue to appear from a seam in the wall where there is a small dent. Water had then run down to land on the top of our stove leaving a rusty orange mark which jumped out as. Outside there was no obvious gap where water could get in. So that will be another thing for them to look at when they visit us. 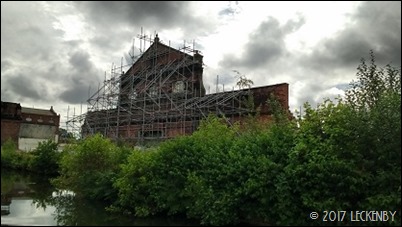 We pushed off and worked our way through Broadheath, Sale and Stretford. The wide deep canal means you can go that bit faster than on most canals. A group of novice rowers was out on the cut so we slowed right down to pass them only giving one pair a slight fright as they hadn’t seen us approaching. Coming the other way though was a long line of boats, did they all know something that we didn’t? Or maybe it was Watch House Cruising Club going out for a cruise. We wondered how much actual rowing was going to be achieved with all these boats going past. 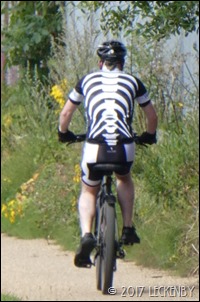 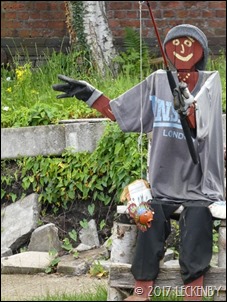 As we passed the cruising club a group were cutting back vegetation that backs onto the sight from the tramway, keeping the place spick and span. Two cruisers pulled out in front of us, not normally a problem, but these guys went slowly. We were soon joined by other boats making a long line heading northwards. At Waters Meeting everyone veered left, no-one going into Manchester. Past the Kellogg’s factory we all trundled and then the entrance to the Trafford Centre came into view. Last time we passed here there had been a long line of moored boats, but today not one, until we pulled in and tied up on rings letting the long line of slow boats coast past. 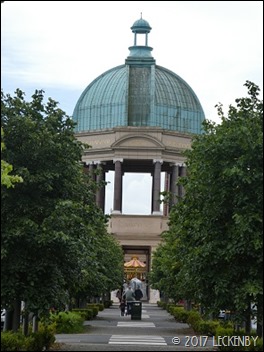 Not normally ones for big shopping centres but today we hoped the Trafford centre and surrounding stores would meet several of our needs. 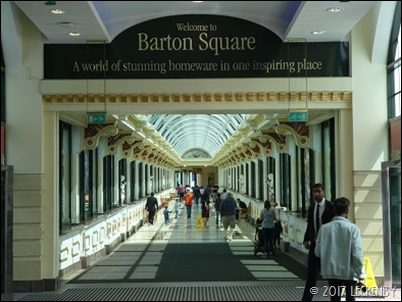 Firstly EE. My mobile despite having had a factory reset hadn’t improved it’s knowledge of its own charge. The chap in store tried charging it, which we knew was pointless and then said that he’d be able to send it off to be mended as it had a two year warranty. Good and bad news, no forking out for a new phone, but my phone would be returned to the store that sends it off. So I will cope until we get onto the Lancaster Canal, as we will be able to return quite easily for it once it’s mended. With this done we left the palace to consumerism and walked around numerous roundabouts to B&Q for a scaff plank. 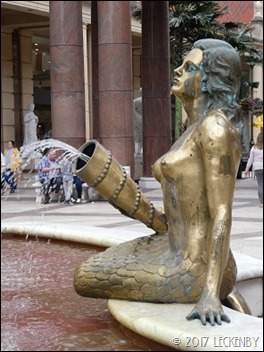 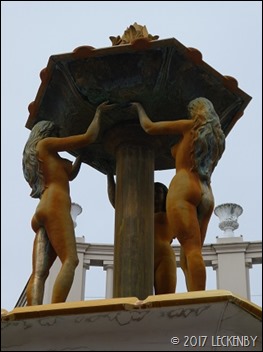 With the plank returned to Oleanna we then returned to visit Asda to stock up for the next few days. There are a couple of ways down onto the towpath from the whole area, but the amount of fences making you walk through places to get to the next was irritating, especially with four heavy bags of shopping another way to the towpath wouldn’t have gone amiss. 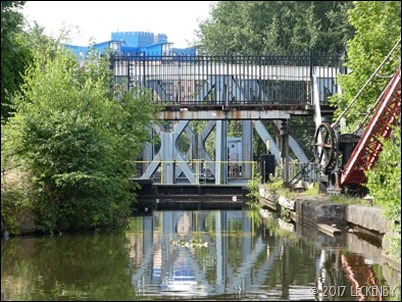 Once everything was stowed away we pushed off again heading north once more. Ahead we could see a couple of boats had pulled into the side, as we got closer the reason came into view. Barnton Swing Aqueduct was swung, closing our navigation but opening the Ship Canal. We pulled up alongside the other boats to wait. A Liverpool Ferry had gone through packed with passengers about fifteen minutes earlier and the aqueduct would remain closed to us until it had returned, the rumour was this would be about an hour. We went to have a good look and chatted away with the others who were waiting. NB Sandy B and NB Alice were out on a cruise from Watch House and were the last two out of eleven boats heading to Worsley today. 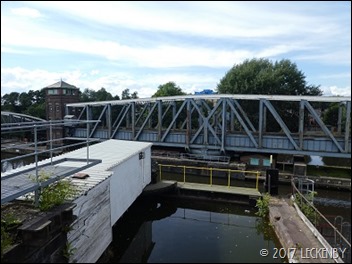 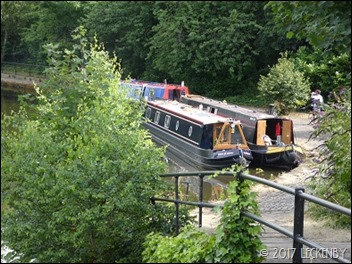 We’ve been over the aqueduct several times now, but never seen it swung. Always hoped we’d get to see it one day, but didn’t realise how long a wait it would give us. After a phone call to the Bridgewater Canal by the Commodore of the boat club we were told that it was likely to be another hour before we could cross as it is too expensive for them to open and close the aqueduct twice for a few narrowboats. By the time the ferry came zooming back through there was a coal boat and five narrowboats waiting to cross. 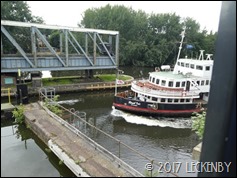 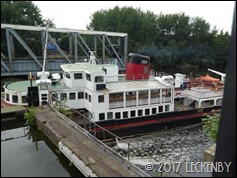 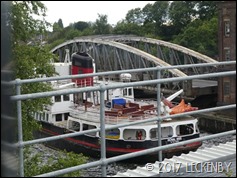 The aqueduct, the first and only swing aqueduct in the world is Grade II* listed and is one of the seven wonders of the waterways. Considered a major feat of Victorian civil engineering it was designed by Sir Edward Leader Williams (who was also involved with the Anderton Lift Bridge) and opened to commercial traffic in 1894. It replaced an aqueduct when the Manchester Ship Canal was built, taller boats were to pass along the ship canal. The 330ft long iron trough pivots on a purpose built island. Gates at each end of the trough close to retain 800 tonnes of water as it pivots. Wooden troughs sit below each end catching water that escapes, which isn’t much. 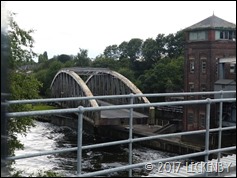 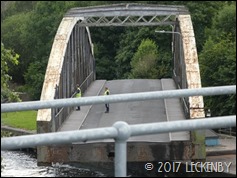 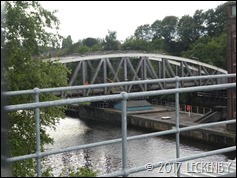 From the same island the Barnton Road Swing Bridge is also operated and pivoted. This however was swung twice, you can’t stop cars for a couple of hours! At around 6pm the ferry came back through and the road bridge was swung back very quickly, except it didn’t seem to lock into position, so it was swung back to have another go, this worked and traffic was soon moving across it again. The chaps operating the bridges moved, one into the tower and one to each end of the aqueduct.
Barnton Swing Aqueduct Video

The above is a link to a video of the aqueduct swinging back across the ship canal. I’ve speed it up a bit to 8 times the actual speed. Warning if on limited internet it is around 45MB, the original was nearly 2GB and my arms ached taking it. 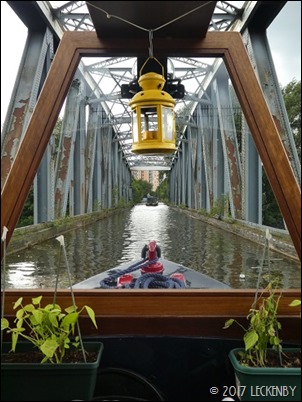 The whole operation of the aqueduct took about ten minutes. First swinging back across the ship canal, locking in place (a yellow topped pole drops), levels are equalized. Then the chaps at either end wind handles to move the gates at each end of the trough, they look like the clown winding the credits at the end of Camberwick Green, only a bit faster! They cross the remaining gates that retain the water in the canal and wind them back too. As soon as the way was clear the coal boat was first across, followed by everyone else gradually pealing off from each other. 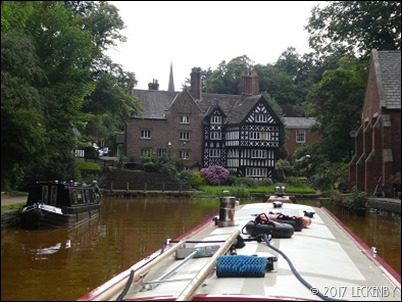 Once across the water gradually turned more and more orange as we neared Worsley. One boat pulled in near the water point, but we carried onwards round under the M60, past the rest of the Watch House Cruising Club boats who had made themselves at home on the wide towpath. A short distance on we moored up and settled down for the evening after a busy day. It was too late for Tilly to go out, but she had different ideas! Somehow she managed to open up the back door and in a blink of an eye was off the boat and running around like a loon on the towpath. Neither of us know how she did it, maybe she has mastered the bolts on the back doors! I’ve been fooling them for weeks by rattling the bolts. I’ve known how to get out for at least a month and quite often go out for a little jaunt whilst they are tucked up asleep. Closing the doors took more mastering than opening them! 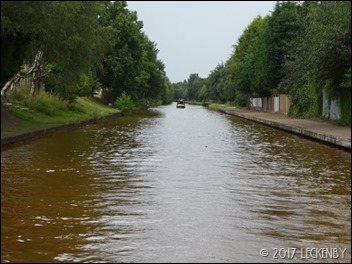 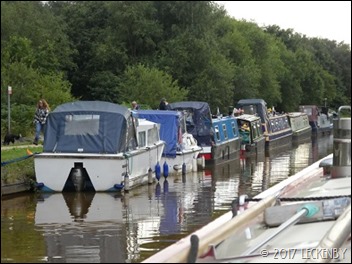