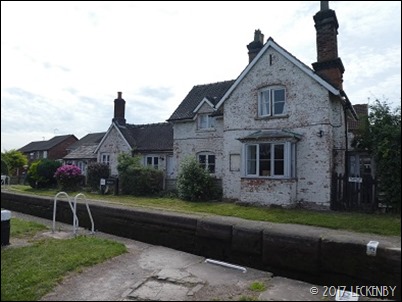 As we were getting ready to set off we heard NB Halsall approaching. The coal boat had problems over the weekend and now mended was trying too catch up on it’s rounds. So I left Mick to untie Oleanna and headed down to the lock to see if I could help any. There was a chap helping who lived locally who had come to do the same, so I wasn’t needed after all.

A hire boat seemed to not be able to make up it’s mind it was going too and fro on the other side of the bridge hole at the junction. It wasn’t turning in towards Wardle Lock so I hadn’t stolen the lock from them. A chap from a boat behind us went down to see what was happening with them as I dropped Oleanna down. He came back saying that the hire boat were wanting water and to come up the lock, should he wait for them, or were they going to stop trying to do water, no-one knew, not even them! Their attempt to fit a hose onto the water point wasn’t going well with a lady just holding the hose against the tap. I wished the chap behind Good Luck as Mick started to turn Oleanna at the junction back onto the Trent and Mersey Canal. 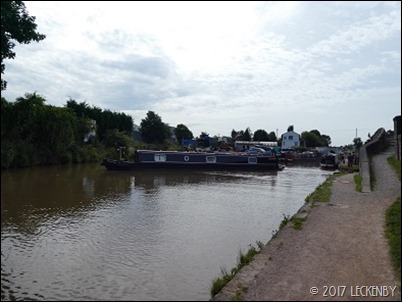 Another boat was coming through the next bridge and had only just seen Mick waiting for them. They were wanting to head up Wardle Lock, so as the lock was empty and the hire boat didn’t know what it was doing I suggested that they should go up, the chap from the boat behind us also suggest this as he didn’t really want to wait for the indecisive hire boat. Except the hire boat had just made up it’s mind to go for the lock! The photo above is shortly before the third boat entered the equation. Mick has just come out from under the bridge on the right and is turning towards the camera. The hire boat is at the water point just past the bridge, it’s stern is visible. The third boat then came from behind me wanting to turn right under the bridge, but Mick was in it’s way to swing out for the turn and they were in his way to get out of the way, along with the hire boat most probably reversing to try to turn right too. Mick managed to get past everyone and then we ran away, so no idea who got to the lock first, the poor man behind us! 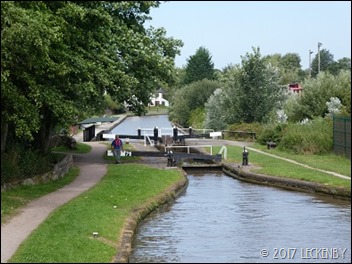 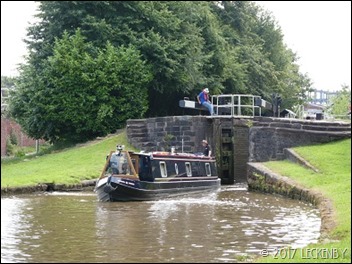 At the three Middlewich Locks there were volunteers on, one for each lock. Considering we have done these locks numerous times, we’ve never done them with lock keepers. I was ready to go ahead and set the next chamber, come back etc, but no need. We’d arrived at a bit of a lull, no-one was coming up, so each chamber was set for us just before Oleanna arrived at it. Three jolly chaps all in radio contact and very efficient. I suggested to them that maybe there should be a volunteer to stand at the junction and act as a traffic warden, but apparently Wardle Lock is in a different area to the Middlewich Locks so that is why there was no volunteer on there.

The other very odd thing was the distinct lack of hire boats below the bottom lock. There was one which was part way through being fitted out, but that was all, every boat was out. We pulled up just after the hire base and filled with water. The pressure wasn’t so good so I had time to walk back through town to Kings Lock chandlers for some International Woodskin for our cratch and front doors as I think they could do with an extra coat or two. Sadly they didn’t have any, but Midland Chandlers at Preston Brook had, so a tin has been put aside for when we pass. 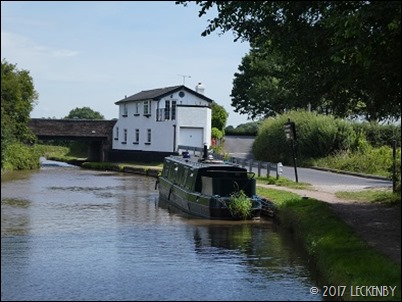 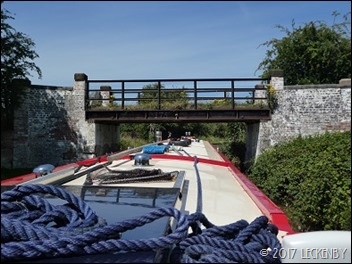 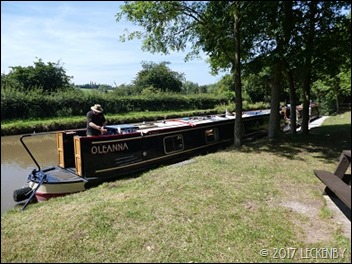 At Big Lock we joined with another boat going down and then stopped at the recycling centre canal side to dispose of rubbish and some engine oil. On we pootled and soon arrived at Bramble Cuttings. Two narrowboats and a day boat were moored up, not enough space for us. But the day boat looked like they were packing up and about to pull away leaving an Oleanna sized gap, which we tucked ourselves into quickly. This is only the second time we’ve managed to get a space here. Off side, picnic benches, and rings,it’s a lovely mooring. Trees, sideways trees, friendly cover, what more could I want. However there were three dogs on this idyllic mooring and the small amount of shade was about to disappear as the sun moved round. 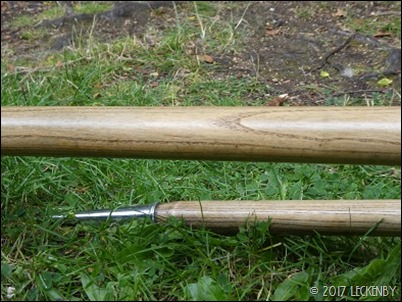 So we moved onwards further north towards the flashes where there would be trees on the port side to shelter us from the heat of the sun. To our surprise there was no-one else moored up, so we picked a good bit of shade and settled down for the rest of the day. Lots to play with here, although the birdies could have sung a bit quieter for my liking. I spent the afternoon giving some attention to the boat hook and pole. They had greyed a bit after three months of sitting outside, so I sanded them back a bit and gave them a first coat of varnish. Quite pleased that I hadn’t left them any longer, just hope there will be a couple of days soon when I can get another two coats on them. As I sanded I could see the weather front coming over the sun went and the wind picked up. We are forecast to have rain and possible thunder storms early in the morning.