Horsenden Hill to The Fox, Hanwell 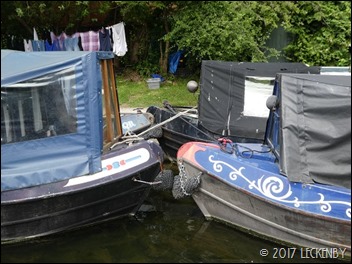 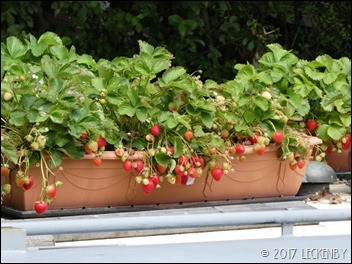 A much quieter mooring last night, just the paraquettes to contend with. We carried on along the Paddington Arm towards Bulls Bridge in the sunshine.  Passing the High Line Yachting moorings we wondered if there were different charges for inside and outside boats. Would it be better to have people cross over your boat, or to have to cross someone else’s? 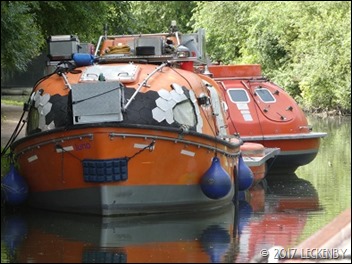 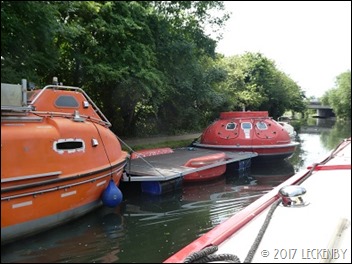 This is the first time we’ve come across a floating granny annex never mind one with a terrace. It looks like the usual life raft was first, followed by the round pod and these have been fixed together with the joining terrace. 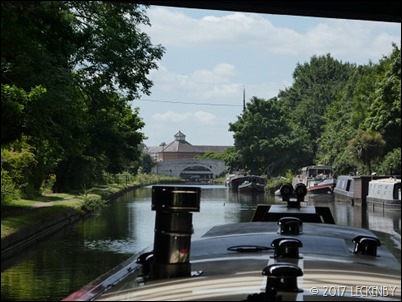 Not much further and the familiar sight of Bulls Bridge came into sight. We turned left and pulled into the empty mooring by the water point. Lunch would be needed before we went any further. A pint of milk purchased and we were off again, heading southwards! Mick really wanted to take Oleanna down the Hanwell flight as this is where he grew up and lived before moving to Scarborough. 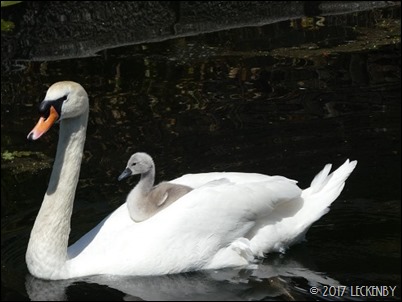 Above the locks  this was the cutest sight that greeted us. Mum was definitely very proud of her one youngster. This year we’ve seen large broods of ducklings and cygnets, not unusual as many don’t make it to adulthood. But on our journey out from London the broods seem to have survived all that nature has thrown at them and having eight teenage cygnets seems to be the norm around here, so this Mum was right to be protective of her one offspring.
Last year when we reached the top of the Norwood Locks we were greeted by two very jolly volunteers. They got their bikes out and helped us down the eight locks, today there seemed to be no-one about, so Mick rang the number but got no reply. No-one on duty. Never mind we are quite capable of doing the locks and there was another boat following us that we could share with.  We shared the top two locks before our companion pulled in to moor for the day before the Hanwell Flight. 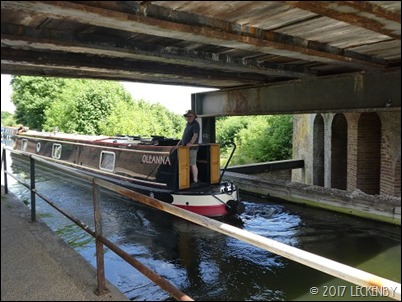 Here I had to walk ahead to get the photo of Oleanna going through Three Bridges. The road goes over the canal, which goes over the railway, which isn’t really a bridge but it still counts. From here on we were on our own and every lock was against us. Normally I would walk ahead to the next lock and lift a paddle so that it would be filling as the one above was emptying, but with my right foot a bit sore today we worked one lock at a time saving me walking the flight twice.
At the second lock a couple walked up and started chatting to us. It turned out that the chap used to drive hoppers from Brentford to Bulls Bridge and sometimes to Lime House in the 70’s. He then progressed to driving a tug called Ruislip up and down the Hanwell flight. When Mick was a child he used to watch the boats coming up the locks, he most probably watched this chap time and time again. 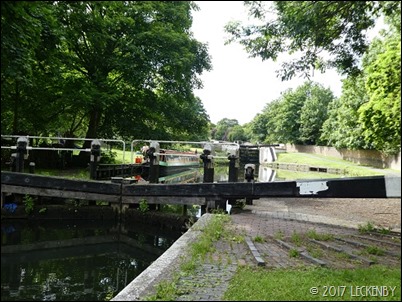 It is such a pretty flight even if what was the asylum backs onto the canal for much of it. As I filled the second to last lock Mick walked down to see if he could fill the one below whilst we waited. When he got there there was a chap wanting to come up, the lock was neither full nor empty, so in no-ones favour. Mick was asked where we were, so Mick told him. “So you’re at the top of the flight?”, No just the next lock! “ Oh, so we can share the lock then”, No we are coming down and you are going up! The exchange took sometime until the chap decided to empty the chamber to be able to come up and we’d swap in the pound. 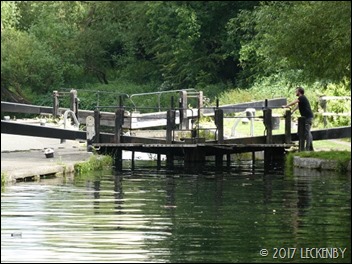 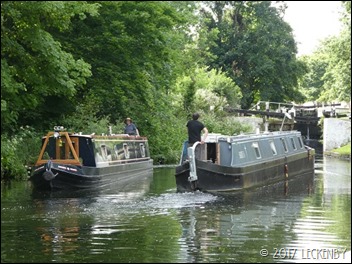 Mick came back up to join me and bring Oleanna into the lock, we then waited as a masterclass in how not to operate a lock went on below. Both gates were opened, he then went for his boat. Everything took so long, maybe we should have helped, but I was trying not to walk further than I had too and anyway we needed to empty our lock. With the gates closed behind his boat and the paddles dropped he then lifted a gate paddle, then the other one. The gate paddles produce a torrent of water through the gates and if you are too far forward can sink your boat, especially if your front doors are open! As he started to rise we started to empty our lock, hoping that he wouldn’t sink in the process. When Oleanna was level I opened up a gate and headed down to see if I could help any.
He was just considering opening the ground paddles, so I obliged with my side. As the boat was thankfully rising his dog was wanting to jump off, so he was pushed inside and the doors closed, only for it to appear a few seconds later at the stern. Mick’s observation that cider had slowed the cogs in the chaps head became very apparent. I asked if he would need one gate or two. Some people prefer both gates open, but most single handers only want one, less to close. The chap walked across the gates to the centre and stood eyeing his boat up, trying to decided how many gates he’d need. “ If it’s a narrowboat it’ll fit through one gate” I said, maybe this was his first lock ever. The cider cloud eventually let the information get through and he agreed that one gate would be fine. He was a bit surprised that there was nowhere to moor in the middle of the flight so he still had at least five locks to do. I just hope he manages them without incident. 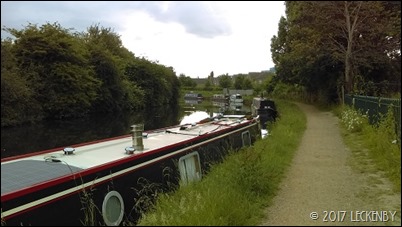 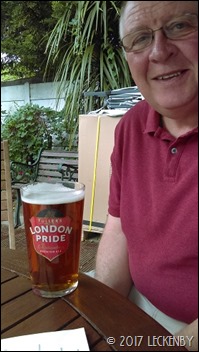 The silt mound below the locks where the River Brent joins didn’t seem bad today as we sailed straight over without a problem. A space showed itself and we pulled in to the high bank. After restorative showers were had we headed off to The Fox pub for some food and to have a drink or two with Mick’s friend Pete Hinton. Pete had lived with the Harfords, close friends of Micks whilst he finished school, so became part of the family. We last saw Pete about four years ago so it was good to catch up with him and hear of his plans for the future. The evening was finished off with a short walk up the road to check on Mick’s old flat, it was still there.