Today we have headed from Marple on the train to Jonathan Wilson’s boatyard in Sheffield.
This was to be a meeting with Ken and Julia Warriner who are acting as consultants on the boat builds. Ken and Julia founded Fernwood Boats and built 90 bespoke boats until they sold the business a few years ago. 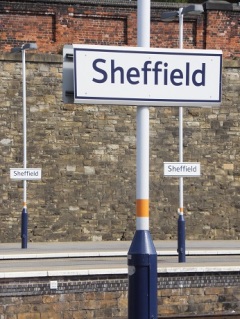 Julia was very welcoming, introduced us to Tracy who deals with all the paper work. They confirmed that they had received our deposit. We’ll get a receipt once the hulls identification number is set, this will appear on all paperwork throughout the build and importantly on the hull. Ken was quite busy in the yard, but was around for questions should they arise, as was Jonathan.

Today’s first meeting was to run through the general layout of the boat and style of hull. Regarding the hull we had already discounted various types of boat. A 58 ft semi trad is what we are after. On Sunday we had seen two Josher bows and 2 Trad bows. The Josher has more curves to it, giving the bow a rather lovely shape that we like, it also is meant to handle better in the water. However it costs more than the Trad. Julia had to check how much space would be needed for the engine we want, which would dictate the semi trad stern length. Also the Josher bow takes up that bit more space than the Trad bow, 2 foot more! This is to keep the lines and curves true. Jonathan came through to explain from a craftmans point of view and suggested we could add 6 inches to the length of Oleanna to help.

We have managed the two shortest locks on the network in NB Lillyanne, she is 59 ft 6 in with her fenders lifted, doing the Salter Hebble locks last year was a squeeze and the top two we had to do backwards with half an inch spare! We don’t want to avoid these locks, so an extra 2ft is not an option, but we can manage an extra 6 inches.

Then we started running through the basic layout of the boat with Julia. Before buying Lillyanne we had always liked the idea of reverse layout, but had only spent two nights on a hire boat with galley at the back. Now after a year living with reverse layout on Lillyanne we wouldn’t have it any other way. We like being sociable out on the back, making a cuppa whilst cruising is easier with no chance of spillage on bedding, but the main reason is you can keep an eye on your cruising sausage rolls in the oven better!

We worked our way from stern to bow gradually, getting distracted by windows or side hatches occasionally. A few weeks ago I had started to revamp the layout of our original ideas for Oleanna from a few years ago. I had intended to get them out again, but then I had my accident involving my little finger, rope and a big river lock. Currently I am having to do virtually everything with my lefthand. Technical drawings and wronghandedness do not go together. But at least we had a starting point and list of what we’d like/need. 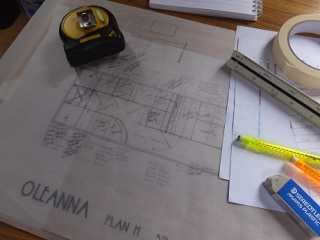 Going bespoke we can (if we can afford it) add a better oven, hopefully a double oven, A dishwasher, fridge and small freezer. Food storage works well for us in draws, rather than cupboards. Fernwood had a good solution to access corner cupboards for storing occasionally used things which doesn’t involve carousels (so much wasted space!). L shaped dinette with storage for a drawing board for my work behind it. We discussed different types of table to have here and that we would require it to make into a bed for guests.

The saloon would have a sofa bed, multi fuel stove, and storage for books. Bathroom a walk through with quadrant shower, composting toilet, and sink. Bedroom, 5ft cross bed, obvious storage for cloths and a few taller bits. We also want to put the washing machine here. you take your dirty clothes off here and store them clean here, so why not have your washer here too.

When we moved on board just over a year ago we brought my cat Houdini. Sadly she isn’t with us now, but the time is coming close to having another furry friend, so certain things need considering for them too.

12 volt white goods for boats are expensive compared to 240 volt. Ken is keen for us to consider buying from the high street saving money, this would mean having to leave the inverter on 24/7 for the fridge and freezer, which Mick is not so keen on. He has been given an inverter to research before we make or minds up.

In the end we added up what space I had allocated for each area, we were 18 inches too long, which is the amount Jonathan has taken for the Josher bow. So we have a long list of things to think about, look at, research. Julia will also do the same and start on some CAD drawings of layout. Decisions you make in one area have knock on effects to other areas. but we are starting with what we’d like, we know that not everything is possible to shoehorn into the space we will have if we want to be in there too! But there may be solutions we can’t think off.